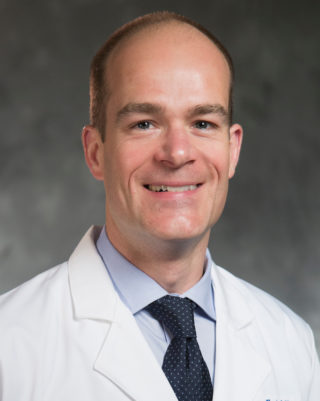 Kevin G. Hueman, MD, FAAOA, is a board certified Otolaryngologist / Head & Neck Surgeon and a fellow of the American Academy of Otolaryngic Allergy. Dr. Hueman was born in Fort Belvoir, Virginia and–as the son of a U.S. Army Officer–had the opportunity to grow up in various locations to include The Netherlands. His mother is from Holland and Dr. Hueman’s first language was Dutch. After graduating as valedictorian of his high school class in Fayetteville, NC, Dr. Hueman studied chemistry, life sciences and nuclear engineering at the United States Military Academy at West Point. He graduated as a Distinguished Cadet with a Bachelor of Science. Dr. Hueman then entered Wake Forest University School of Medicine where he was an elected member of the honor council. After graduation, he completed Otolaryngology / Head & Neck Surgery residency at the San Antonio Uniformed Services Health Education Consortium. Dr. Hueman subsequently completed a fellowship with the American Academy of Otolaryngic Allergy. Dr. Hueman was assigned to Womack Army Medical Center in Fort Bragg, NC, where he had the privilege of caring for United States armed service members, retirees and their dependents. He was promoted to Lieutenant Colonel and served as the Chief of the Division of Otolaryngology / Head & Neck Surgery while he completed fourteen years of active duty service.

Dr Hueman’s wife, Elizabeth, is also an Otolaryngologist / Head & Neck Surgeon. They have two boys and a girl. In his free time, Dr. Hueman enjoys spending time with his family, running, cycling, swimming and playing basketball, tennis, and golf.